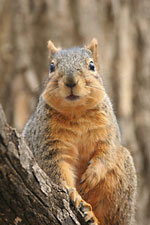 The fox squirrel (Scuirus niger rufiventer) is the most common species and can be found in most cities or towns as well as in open woodlots, hedge rows and shelter belts of rural Kansas. Fox squirrels are the largest of the three species averaging 18 to 27 inches from their noses to the tips of their tails and weighing from 1 3/4 to 2 1/4 pounds. The fox squirrel is so named because its color often resembles the brownish, red-orange of the red fox. Older female fox squirrels may produce two litters of young annually, but young females will produce only one litter.

Two subspecies of gray squirrels, Scuirus carolinensis Gmelin and S.c. pennysylvanicus, can be found in the eastern one-third of Kansas. At 17 to 19 1/2 inches, these squirrels are slightly smaller than fox squirrels, and weigh 1 1/4 to 1 3/4 pounds. They are gray with white underparts and white-tipped tails. Older females may give birth to two litters per year while younger ones only produce one. The average litter size for both squirrel species is three.

The southern flying squirrel (Glaucomys volans volans), 8 1/2 to 9 1/2 inches long, is the smallest tree squirrel species found in Kansas. This squirrel is a protected nongame species. Unlike the fox and gray squirrels, flying squirrels are nocturnal. They use their extremely large eyes and keen sense of smell for foraging at night.

Tree squirrels in Kansas mate in mid- to late winter and again in early summer.