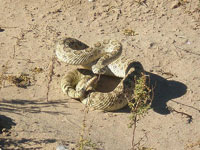 Many people either do not know anything at all about Kansas snakes or have misconceptions about them. Most have heard so many stories about snakes that they fear all of them. This fear is unfounded. It is important to learn to identify the poisonous snakes that might be encountered in a given area and realize that all other snakes, lizards, frogs, toads, salamanders and turtles do not have a poisonous bite and need not be feared.

Conserving snakes is another aspect. Too many people kill snakes unnecessarily just because they are snakes. There is no more reason to kill a nonpoisonous snake than a song bird. In many cases, snakes are of direct economic value.

In Kansas, snakes are protected by state law. You should obtain a collecting permit from the Kansas Department of Wildlife and Parks before attempting to catch and keep a snake.

Reflex action can cause an apparently "dead" snake to bite, so do not handle "dead" snakes with your hands, use a stick.