Before it was settled, most of Kansas supported grasses that tended to restrict prairie dog populations. Proof of this taller growth can be seen in parks, cemeteries, railroad right-of-ways, road ditches, and rangelands where deferred grazing is common.

Originally, prairie dogs thrived only in places overgrazed by native animals. Populations expanded as European settlers arrived. As buffalo numbers dwindled due to overhunting and before the range was stocked with domestic livestock, prairie dog populations started to decline. Over the years, rangelands were fenced, ponds constructed, and large areas plowed. Remaining rangelands were overgrazed, and prairie dogs inhabited an estimated 2 million acres by the early 1900s. Prairie dog management programs and control laws were implemented, some of which remain in effect today.

Prairie dogs occupy an estimated 130,000 acres of rangeland in Kansas. This is about 1 percent of suitable habitat, leaving ample room for prairie dogs to increase in Kansas. 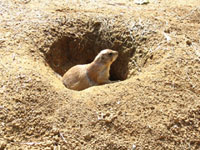 Black-tailed prairie dogs are large burrowing ground squirrels found in the western two-thirds of Kansas. Weighing 1 to 3 pounds and measuring 14 to 17 inches long, prairie dogs have reddish-tan fur, large eyes, small ears, a broad head and a black tip on the end of a hairy tail. Five species exist in North America, but only the blacktailed prairie dog is found in Kansas.

Plague is a health risk for individuals involved in prairie dog management programs. Although a few cases of human plague occur in the western United States each year, there have not been any recent cases of humans contracting plague in Kansas.

Plague is transmitted to humans through bites of fleas that inhabit wild rodents infected with plague. Most human plague cases are related to direct contact with wild rodents. Early symptoms include swollen and tender lymph nodes, chills, and fever. Early diagnosis and treatment are imperative. When walking through suspected plague areas, apply an insect repellent to socks and pant cuffs before tucking pants inside boots.