The muskrat (Ondatra zibethicus) is a stout, chunky animal with short legs. An adult is 22 to 25 inches long and weighs an average of 2.5 pounds. The 11-inch black tail is scaly, practically hairless and laterally flattened. It is used as a prop when the animal is on its hind feet and as a swimming aid. The large, broad, hind feet are partially webbed and also well-adapted for this purpose.

Muskrats have dense, silky, grayish underfur that is heavily overlaid on the back and sides with glossy, dark-brown guard hairs. In Kansas, muskrats are classified as furbearers, and their harvest is regulated. Muskrats are historically an important item in the fur market. Their population in Kansas is considered spotty. Because of a decrease in surface water and an increase in stream pollution muskrats have declined. But, in some areas of good habitat, they are abundant. Sometimes muskrats cause problems in sewage treatment ponds and drainage canals.

Muskrats are seldom far from water. They prefer the still or slow-moving water of marshes, ponds and streams. Muskrats are active year-round and, while usually nocturnal, may move during daylight hours.

Muskrats are primarily vegetarians, feeding mostly on the roots and stems of aquatic plants and, if they occur near water, legumes, grasses, grains, garden crops and apples. They occasionally eat animal food, particularly crayfish and freshwater mussels. 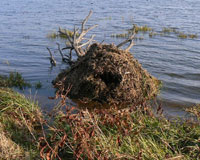 Muskrats live in houses constructed of vegetation or in burrows dug into banks. Both houses and burrows have underwater entrances and above-water living chambers.

Muskrats breed from early spring until fall, giving birth to several litters of from four to seven young. The young are born naked and helpless in protected nest chambers in houses or bank burrows. Young muskrats grow rapidly and are independent at an early age.