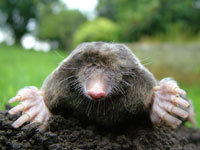 Moles are small mammals that spend most of their lives in underground burrows. They are similar in appearance and size to shrews and meadow mice and may occupy the same habitat. They are seldom seen by humans; when seen, they are frequently mistaken for mice or shrews. Only one species—the eastern mole—lives in Kansas. The most conspicuous features of the mole are the greatly enlarged paddle-like forefeet and prominent toenails, which enable the mole to literally swim through the soil. The legs are strong, the neck short, and the head elongated. Moles lack external ears and their eyes are so small that at first glance they appear to be missing.