Over 100 years ago Henry Ward Beecher said: "If men had wings and bore black feathers, few of them would be clever enough to be crows ." They can count, solve puzzles, and associate noises and symbols with food. They can even mimic human voices.

Crows are native birds in Kansas; they have lived here for hundreds of years. We believe their populations declined between 1900-1960, though they are now increasing and are expected to increase further between 1961–2000 +. Changes in habitat, fewer people living in rural areas, more trees growing in Kansas, and more wintering places in larger cities which offer protection and food are conditions believed to be partly responsible for increasing crow numbers in Kansas. 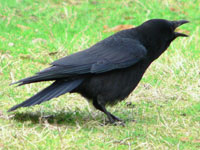 The common crow, Covus brachychynchos, is one of America's best known birds. Their large body size, 17 to 21 inches long with completely coal-black plumage and the familiar "caw caw" voice, makes them an easy bird to identify. No other bird should be confused with the crow, with one exception. In the western one-fourth of Kansas a summer and winter resident, the white-necked raven, Corvus cryploleucus, can be found–sometimes crows and ravens intermingle in winter flocks. The raven, even though as the name implies "white-necked," does not have a white neck visible to a person watching the birds. Ravens can be distinguished from crows by their larger size, call, wedge-shaped tail and flight pattern which commonly includes soaring or gliding. Crows have a frequent, steady wing beat with little or no gliding.