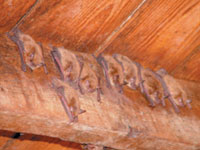 Bats are unique and interesting animals, but their nocturnal nature makes them one of the most mysterious and misunderstood mammals in Kansas.

Bats belong to the mammalian order Chiroptera, which means "hand-wing." They are the only mammals capable of true flight. In terms of the number of species, Chiroptera is the second largest group of mammals in the world. Only the order Rodentia (rodents) contains more species.

Of the approximately 900 species of bats found in the world, 45 live in the United States and 15 of those have been found in Kansas. Contrary to popular belief, there are no vampire bats in Kansas. All Kansas bats feed on insects. Large numbers of bats are capable of eating tons of insects each year, making them beneficial to humans.

One species sometimes found in Kansas is the Brazilian free-tailed bat (Tadaida Braziliensis). A Texas colony of this species has about 20 million individuals that eat 100,000 pounds of insects per night.

There are many species of bats that make their home in Kansas. See the publication at right, Bats - Urban Wildlife Damage Control, for details on each species.

Rabies is a potential health hazard with bats, but the incidence of rabies in bats has been greatly exaggerated. During the past thirty years, only eight human fatalities in the United States and Canada have been attributed to rabid bats. More people die annually from dog attacks, bee stings, lightning, or household accidents than from bat-transmitted rabies.